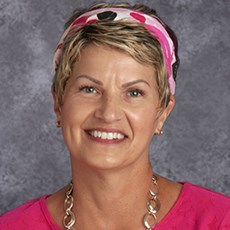 Jacquelyn Grochowski, known as Mrs. G at school, has been working at St. Maria Goretti since 2002. She started as a Teacher Assistant. Then, after earning her certification in a Masters Teaching program from Cardinal Stritch University, became a Kindergarten Teacher.

She earned her bachelor's degree in Information Technology from the University of Wisconsin-Parkside. She was a programmer analyst for nine years for two large corporations in Milwaukee. She decided to change careers when she moved to Madison and has enjoyed teaching ever since.

Jacquelyn and her husband both went to Catholic grade school. They feel strongly about their faith and the importance of Catholic education, which is why their three daughters also attended Catholic school through 8th grade. She and her family have been parish members at St. Maria Goretti since 2002.

In gratitude for God’s generosity, we dedicate a sacrificial portion of our gifts of time, talent, and treasure to serve Christ and His Church by supporting the needs of our parish.