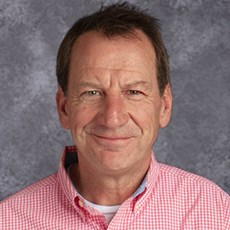 Ron Riese has been teaching at St. Maria Goretti since 2003 and has always been a middle school teacher. Over the years, he has taught Social Studies, Religion, and Communication Arts.

He grew up in Fond du Lac, Wisconsin and attended St. Mary's Catholic School. The day after his 18th birthday, he began working at the factory where his father worked. While working there, he attended University of Wisconsin-Oshkosh to continue his education.

In 1986, he moved to Dallas and earned his bachelor's degree in Business at the University of Texas at Arlington.

Ron and his wife then moved from Dallas to Memphis, Tennessee where he worked in restaurant management until their son, Sam, was born, and he became a stay-at-home dad. A few years later, their daughter, Caroline, was born, and he began his master's degree in Education at the University of Memphis and graduated in 1997.

Shortly after that, his family moved to Madison and he has loved it ever since. He feels blessed to be in his 16th year of teaching at St. Maria Goretti. In his free time, he loves to run, play tennis, bike, and take vacations with his family.

In gratitude for God’s generosity, we dedicate a sacrificial portion of our gifts of time, talent, and treasure to serve Christ and His Church by supporting the needs of our parish.